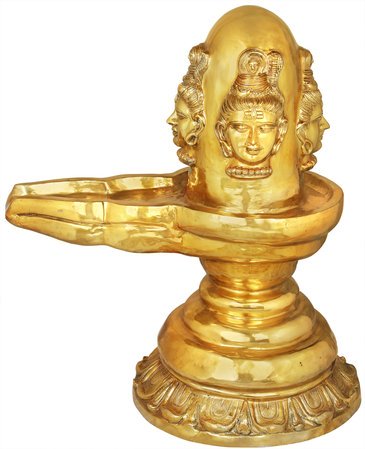 Linga is an aniconic form of Hindu god Shiva. Mukhalinga represents Linga with one or more human faces where, Shiva part is more than the Brahma part and Vishnu part. One with four faces is also said to have an invisible fifth face at the top of the linga. As prescribed In Agamas and Tantras, Mukhalinga falls under the classification of Manusa-linga.

This sculpture with four Shiva faces, each sculpted in their apt assortments and formations in four different directions have a unique symbolism- east face is the Mahadeva, the regent of earth (prithvi), west is the Tatpurusha or Nandi (Shiva’s bull mount). Uma or Umavaktra (face of Parvati) faces north and Bhairava (agni) looks towards south. The invisible fifth face on top, the Sadashiva, governs the zenith and sky (akasha). This icon of Mukhalingam represents the entire universe. It has a unique multilayered pedestal with lotus petals and a huge extended tray-like on which the magnified Mukhalingam rests.

This linga can be installed in temples as well as human settlements like villages and towns forming an exclusive piece of art. It is also opined that a four faced Mukhalingam should be kept in a way that all the faces look at all the four different directions.

There are no reviews yet.

Scroll back to top